When my time comes

There’s no way I would have ever known that I could love someone more than my own.

They were gifted to me so I could nurture, teach, and encourage them. They were born so I could be their number one confidant, cheerleader, and inspiration. They chose ME as their nana because they knew that there was no one else who would love them as deeply and unconditionally as I would.

I can’t imagine my life without grandchildren and will forever be standing on the sidelines, in front of OR behind that tree (like I used to when the boys played soccer), peeking around it once in awhile so as not to miss any of their greatest achievements.

Today when our 32 year old son came to pick up our grandson, after our day of babysitting (around here we call that “Tornado Tuesday”), he took a moment to sit at the kitchen table with me and fill me in a bit on how their weekend away at a ball tournament went.

The thing is, the way I feel about my grand babies is exactly how I feel about my own kids, and it’s moments like today that remind me of the fact that I will NEVER quit being their biggest fan or their safest place to fall, no matter how old they are. Nick once said, “Even if I’m playing sports at 40, I know when I look into the stands my mom will be there cheering me on”.

One of the BEST parts about having kids, are the “kids” they choose as their “framily”. Not once have we not welcomed their choice of friends, and all the extra “sons” that we’ve gathered over the years are still close by today. And I LOVE that! I’m one of THEIR biggest cheerleaders too!

And the sports teams they’ve put together as adults are no exceptions, especially the one that’s in play as I write this. Nick has gathered a stand up group of amazing friends and fellow ball players to share a bit of his journey in life, as his teammates, and my favourite way to spend my time is in those bleachers cheering EVERY ONE of them on! Heck, when the game gets out of hand and the other team doesn’t stand a chance, you’ll often find me jumping on THEIR bandwagon. Okay, maybe not now but when they were little I did!

Everyone plays just as hard, and everyone deserves to win!

But today’s commentary of the weekend was a bit different and I didn’t know that halfway in I would have my own tears (secretly) filling my eyes. You see, he’s the coach and captain of the team and he plays the part by wearing his heart on his sleeve, and is filled with the passion for his desire to win, FOR his team. He’s the first to pull himself from the game, so he can pace behind the closest tree too, the whole time filling the diamonds with the sound of his voice as he proudly cheers them on to a win.

They don’t ALWAYS win though. And I like that. When this team loses, they play hard to accomplish that, which in turn creates games worth watching. But the best thing to keep you humble in life is to lose at something. Not because anyone deserves defeat and heartache, but because there is no better opportunity for growth, and the ability to learn how to be better.

We can ALWAYS be better!

During their first game, and a slow start finding their groove, some players were struggling in the field, “But that’s okay, we win and lose as a team”, he said.

When kids play sports, no one wants to have their errors pointed out and be asked to sit out the next period so someone can replace you, it sucks and it’s embarrassing. The difference as an adult is, when you know you need to sit, you pull yourself without being asked. But that’s not this team’s jam.

I’m so proud of the team that they’ve created and being their number one fan I’ve proudly told them that the improvement they’ve made each year, doesn’t go unnoticed. They are making a name for themselves as the team to be beat, and they don’t give up without a fight.

When they first kick off a tournament it takes an inning or two (or three or four) to shake off the cobwebs that build up between games, but they almost ALWAYS figure it out. And it just wasn’t a slow start that added to the stress, there was some friction among the ranks and then (unrelated), two of their friends, and big hitters, quietly excused themselves as members of the team. Then there was the team they came up against that had 18 players on their roster after adding a full line up of subs, but they got caught putting in someone who wasn’t on that list and we all know how things can get heated when someone calls you out (especially if two players I know well are in the game) lol.

But they dug deep and won that game by one run!

After battling through ten games to stay alive on their way to the finals, they were tied in their eleventh match up and needed to win. Their pitcher held off their competition and the team got lucky with their last bat where they brought home eleven runs to win the game! When it was over and they knew they were headed to play in the match for gold, Nick walked away, found a quiet piece of grass where he dropped to his knees and laid on the ground to gather himself through some self reflection. And he said he cried.

And it was in that moment that I cried too.

He had struggled to keep the team’s spirits up through wins AND losses, put his arm around a teammate and encouraged them back into position before the next game, said goodbye to two of his friends as they moved on to their next adventure, and struggled to not let the guy on the other team “put him in the dugout”!

He may let his passion for sport get the better of him now and then but it’s all in the love for the game, and 100% for what he believes, at the time, is the best for the team. I hear it in his voice every time he talks about the love for the game and the people he chooses to call his “family”.

I’m not naive to the fact that my kids (taught by their father), have a crazy ass competitive side and I know damn well that when they are bent down over a face-off that they’re telling the other guy, “I slept with your mom!” But that’s the passion I was talking about. Me on the other hand, who loses at dominoes every time she plays but is happy just being with her friends, couldn’t care less who wins or loses, as long as everyone is having fun. 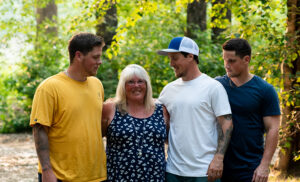 As they grow older it’s getting easier to listen, and then just sit and look at them, from the inside out. It’s then that I realize that they’ve learned how to figure life out on their own, and I’m okay with leaving them…

When my time comes.